A Creepy True Story For Halloween

This happened one night a few months ago, after we put the kids to bed. My wife and I were in the office talking, and we heard our younger son wake up, kind of making little noises. Sometimes he talks in his sleep, we figured he'd fall back asleep or whatever, but we kept hearing little whimpers. Figuring he was having a bad dream, my wife said, "let's go get him". She got up and went to his room and then I hear her say, "Where is he?!". I get up and go to his room, and he's not there - we turn on the lights, he's gone. Then, from downstairs, we hear him start full on crying. It's pitch black down there, and he always comes to our bedroom if he wakes up in the middle of the night. Why would he go downstairs? My wife goes down and gets him and brings him back upstairs.

So a few days later, he comes home from summer camp with his book of drawings and I see this drawing. I ask him what it is, and he says, "slenderman". I ask why he drew slenderman, and he says "I don't know, I just did, I had to draw him, I don't want to talk about it." I don't know how he would even know about the slenderman myth, or why he would draw slenderman. SO CREEPY. I'm sure there's a perfectly logical explanation for all of this though. Happy Halloween! 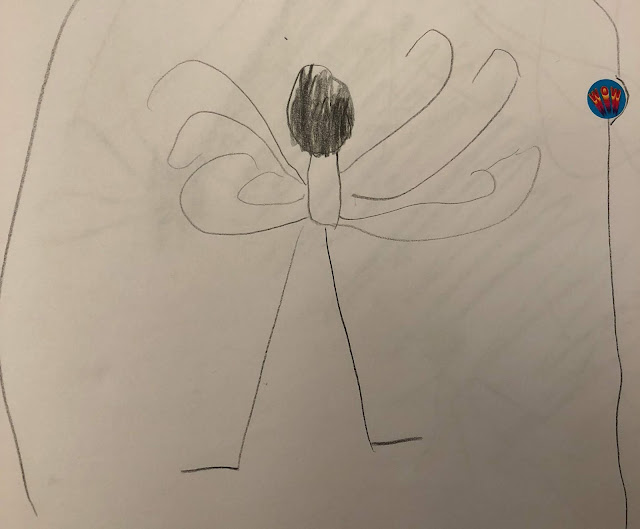 Posted by Jeffrey Brown at 2:18 PM No comments:

Oh, Canada, and something about Apples...tore 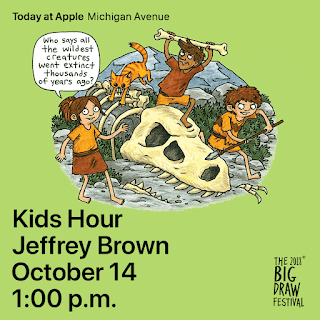 I'm getting ready for my Lucy & Andy 3 tour, which will include stops in Seattle, San Francisco, and Minneapolis. But first, this coming Sunday I'll be at the Apple Store on Michigan Ave in Chicago, drawing cave kids on an iPad as part of The 2018 Big Draw Festival. The event is free, but you can RSVP now online.
And I'll be kicking my tour off in Canada at the Vancouver Writer's Festival! This is my first time in Vancouver (and first time in Canada in a few years), so I'm pretty excited. I'll be doing three events, a couple of which are ticketed, so make your plans now:
Thursday October 18 10:15 AM A Morning With Jeffrey Brown
Thursday October 18 1:00 PM Sparking Imaginations (with Ian Boothby)
Saturday October 20 10:30 AM Cartoons & Neanderthals
Posted by Jeffrey Brown at 9:28 AM No comments: