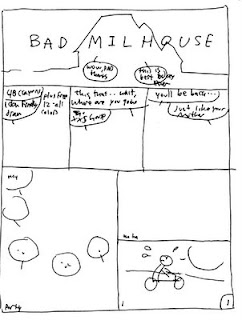 When Sammy Harkham first talked to me about doing a Simpson's Treehouse of Horror story for this year's issue, he mentioned something about the idea of taking one character and really turning them inside out, really getting inside their head. Something like that, he worded it better than I am here. Anyway, instantly I thought of Milhouse and the film Bad Ronald. There were lots of parallels to draw on - Milhouse and Ronald were both nerdy outcasts with glasses, living with single, bitter divorced parents, and capable of unintentionally disastrous bumbling often combined with poor decision making. I plotted out the eight page story and sent thumbnail layouts to Sammy, who said he couldn't understand any of it. Above is the thumbnail for page 1.
My apologies for the early posting on the progress of the page, I should be able to repost about process after the story comes out. In the meantime, check out today's (June 24) Diamond Previews and have your local comic shop reserve your copy of this year's Treehouse of horror comic.
Posted by Jeffrey Brown at 8:50 AM 11 comments: 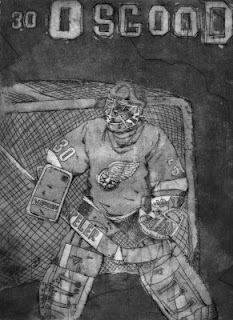 Here's another print from college, this time of Chris Osgood, who'll be tending goal for the Red Wings in tonight's game 7.
Posted by Jeffrey Brown at 8:59 AM 2 comments: 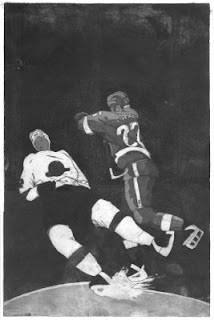 Tomorrow night the Red Wings play the Penguins in game 7 of the Stanley Cup Finals, so here's a print I made back in college, of one of my favorite players, Dino Ciccarelli.
Posted by Jeffrey Brown at 9:23 AM No comments: 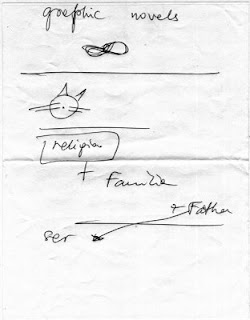 Although I took seven years of Spanish back in high school, I didn't take any more classes in Spanish after my freshman year of college, so naturally it was all very little help at the Barcelona International Comicon. Fortunately, most of the people at the festival spoke some English. In fact, a lot of Europeans seem to speak several languages, whatever that may say about myself, the American education system, or the geographic proximity of a wide variety of languages there. In any case, the Festival also had translators on hand to help out with some of the interviews and panels. It's kind of fascinating to watch - they would repeat the question to me in English, then as I answered they would write out notes and symbols before repeating my answer back in Spanish to the questioner. I felt by the last interview some of my Spanish was coming back to me, but not nearly enough that I didn't need the help. This is a page one of my translators made for my answer to the question, 'What are you working on next?'

Thanks to David Macho and everyone else who worked so hard for the festival, to Montserrat and José at La Cupula, and to all the other guests and artists I had a chance to meet and talk with, for making it a great experience.
Posted by Jeffrey Brown at 8:20 AM 2 comments: