Paul Is Undead, Chapter One 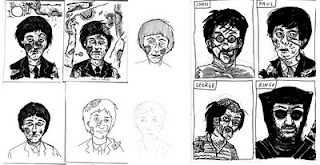 Here's the initial character sketches for my illustrations to the Beatles/zombie mash-up Paul Is Undead, and the sketch-pencil-finished drawing stages for the illustration to chapter one. Change-Bots Two has been on hold while I've been packing to move, but I'll be taking a short break tonight (Tuesday, June 29) to sign with Paul Is Undead author Alan Goldsher at Quimbys here in Chicago. 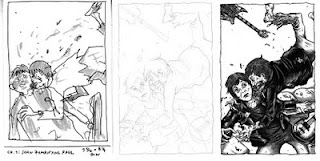 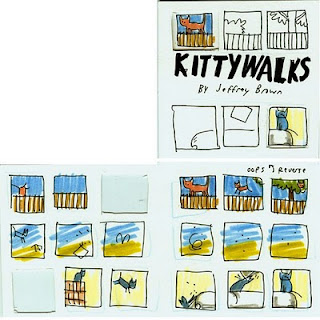 Here's the initial cover sketch for the new cat book. At the time, I was still planning on the book having more of a narrative, with the cat wandering around outside. Chronicle thought it'd be nice for the cover to sync with both the first book (by having the embossed line art) and postcard box (by having die-cut panels). The top of this image shows the cover, while the bottom is the full endsheets, which would be in color. 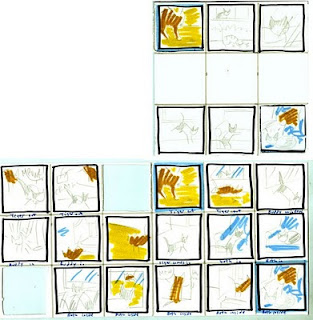 Here's some more sketching for the cover, trying to figure out how to have the endsheets tell a narrative, but also have the cover work on its own as well. 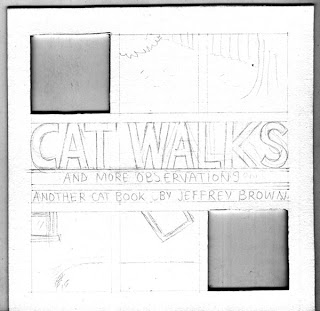 Here's pencils for the cover, working on a design where the cats only showed through in the color endsheet panels.

Eventually, Chronicle and I decided on the title Cats Are Weird. The book lost the narrative and ended up following the format of the first book. These are the pencils for the cover on the right, and for the right endsheet opposite. 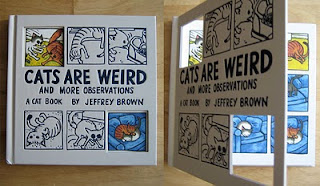 And here's what the printed cover looks like. The book is half in gray like Cat Getting Out of A Bag, and half in color. It just showed up on page the Diamond Previews catalogue today, so you can now have your local comic shop pre-order it.
Posted by Jeffrey Brown at 4:12 PM 7 comments: 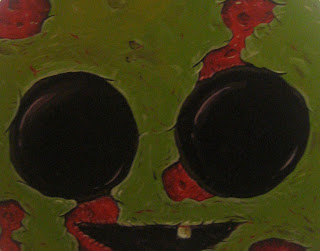 More zombies, this one is my contribution to the Drippy art show at Pop Cult here in Chicago, opening this Friday. 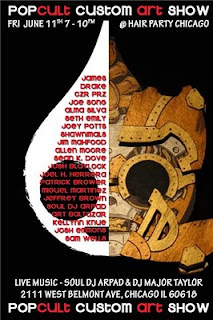 Posted by Jeffrey Brown at 6:31 PM No comments:

You, Me, Them, Everybody 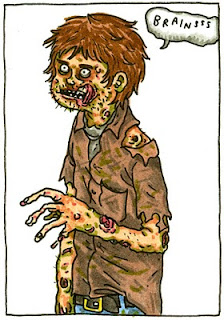 Last week I stopped by The Hungry Brain to be a guest on Brandon Wetherbee's podcast You, Me, Them, Everybody. I can't remember what I said exactly, but it seemed like a lot of fun at the time... and since we're talking about hunger and brains, here's me as a zombie.
Posted by Jeffrey Brown at 9:54 PM 3 comments: