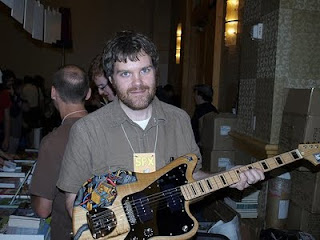 From The Daily Crosshatch, here's a photo with the finished just in time Change-Bots guitar, auctioned off at SPX for the Comic Book Legal Defense Fund. Also at SPX were copies of the newly printed Sulk 3 and advance copies of the documentaryDrawing Between The Lines. The show was a lot of fun and I came home with tons of great minicomics. Now it's back to working on Cat Walks. Also, this weeks episode of Heroes featured a cameo by Clumsy, somewhere around the 39:20 mark. 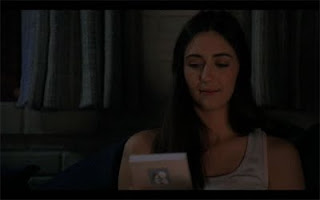 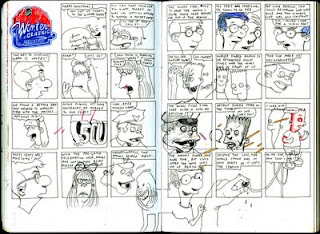 After agreeing to take on the Simpson's in a short story for this year's Treehouse of Horror issue, I started figuring out how I wanted to draw the characters. The big problem was having them be enough in my own style, but also staying true to the characters as most people know them. I had abandoned this story about the seeing the Red Wings play the Blackhawks in last season's NHL Winter Classic game, so I used the space to sketch out Milhouse and friends instead. Please note that all likenesses and images of the Simpsons and this story are copyright by 20th Century Fox Inc. 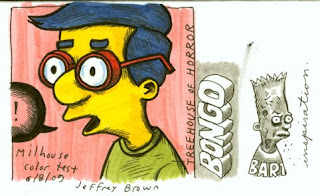 As I started to get a feel for the characters, I also needed to test out coloring. This was a piece of illustration board, with the line work drawn in my standard Uniball Deluxe Micro pen, and colored with Faber Castell brush pens. 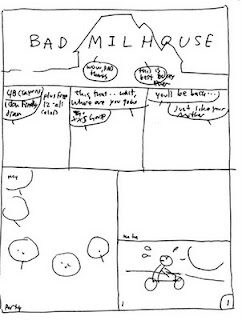 Next up was laying out simple thumbnails for the story. I probably could've made this a 32 page story, but I had 8 pages to work with so I streamlined it as much as I could and planned it out on little pieces of Bristol. 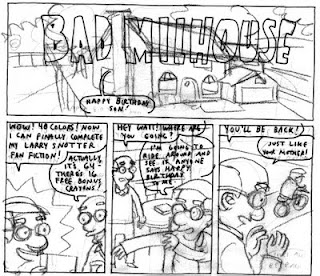 After figuring out the basic story, I pencilled it out on illustration board, drawing at actual print size. Since they'd asked if we could do the lettering separate (for ease in printing translations) I practiced adding the lettering on sheets of tracing paper. 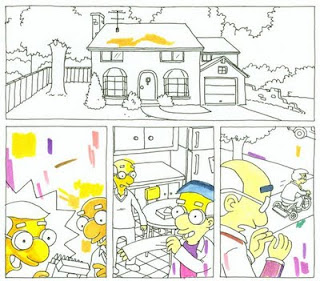 I inked the story's line art with my Uniballs, and then started coloring. Despite testing previously, I screwed something up, or I guess didn't do enough testing, so page one became another test page and had to be redrawn. 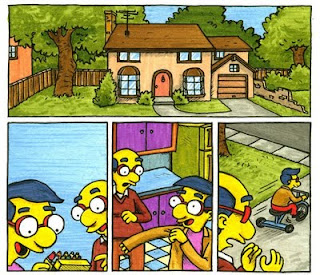 I got a handle on the coloring and completely colored four pages before giving into the feeling that the look and the feel wasn't just right for the story. Not claustrophobic enough, not dark enough, and looking a bit to polished or something. I decided I was probably drawing the story too big, since I usually draw smaller, so I resized things to something like 70% of print size, and re-drew the whole story at the new size, with much more satisfying results. 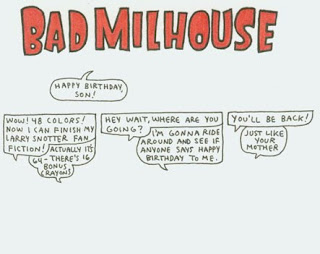 I still needed to figure out the lettering, and this is one of about four versions. As I re-did the lettering each time, though, I also adjusted some of the text slightly. Sammy also talked to me about changing the ending slightly, which made sense and after some thinking I figured out a better ending that fit the story well. 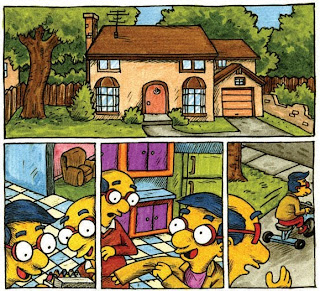 The final artwork had a tighter, more packed feel, to feed into the story's plot about Milhouse living in the walls of the Simpsons house. 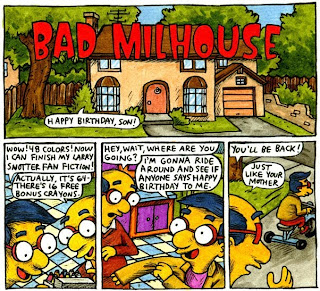 Finally I had to fit the finished text in with the artwork, which required some adjusting, since I drew everything separate without using the computer, which would've no doubt made the whole process simpler. All in all, I'm pretty happy with how the story turned out, although it was also a good learning experience and I'd probably have a better method for doing something like this next time around.
Head out to your local comic shop, book store, or other Bongo Comics outlet to pick up your copy today. I haven't had a chance to sit down and read it yet, as I'm getting ready for SPX this weekend, but seeing the artwork from Sammy Harkham, Jordan Crane, Tim Hensley, Kevin Huizenga (not to mention Dan Zettwoch's awesome cover) should make this one of the best Treehouse of Horror issues yet.
Posted by Jeffrey Brown at 9:43 AM 10 comments:

Tomorrow, The Simpson's Treehouse of Horror Issue #15 hits stores, with my 'Bad Milhouse' story in it. But if you're in Los Angeles, you don't have to wait until tomorrow, come to Family on Fairfax, tonight at 7PM. Jordan Crane, Tim Hensley, Sammy Harkham and Matt Groening will also be in attendance. You'll also be able to see the original art from the issue on display.
Posted by Jeffrey Brown at 5:10 PM 1 comment: 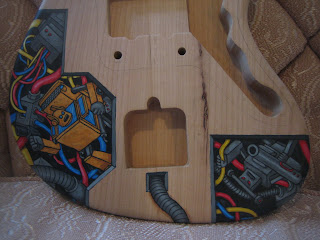 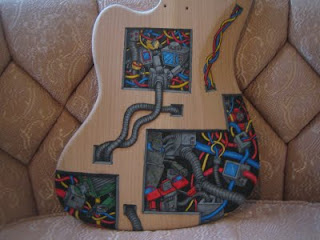 After a late night working on the guitar, I woke up this morning to finish the last bits, so I could send it off to the guitar shop, who will have just a few days to finish and assemble it into a fully functional guitar. Hopefully it'll be ready for SPX this Saturday...
Posted by Jeffrey Brown at 2:04 PM No comments:

So far with the guitar 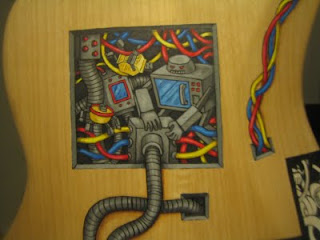 Didn't get as far along yesterday as I hoped, so tonight I'll finish the smaller of the two sections that are left, leaving Sunday to finish the large section so I can ship the guitar off for assembly for SPX. Now I'm off to Windy City Comicon, so if you're in Chicago, stop by...
Posted by Jeffrey Brown at 7:43 AM 3 comments: 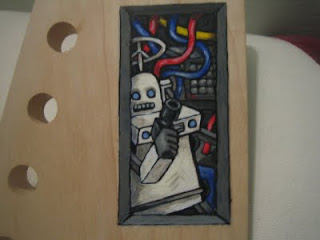 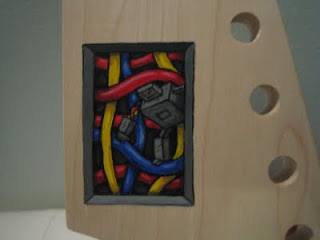 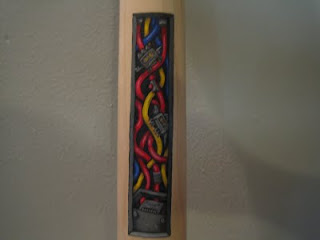 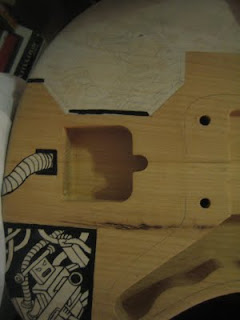 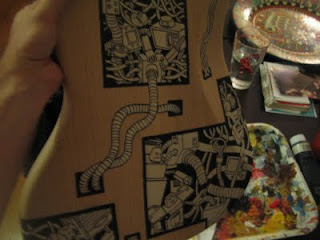 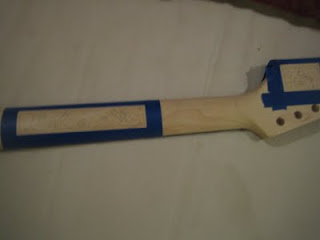 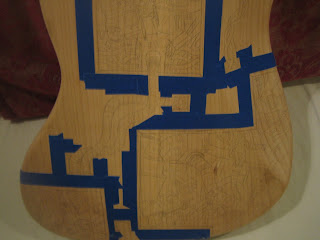 After a lot of thinking and not being able to work on it at all, I've changed my mind about decorating this guitar with an autobiographical/music loves theme and gone back to my initial thought of having the Change-Bots on it. The design is inspired by Han Solo and Chewbacca working on the Millennium Falcon, so the guitar is like a secret vehicle or base for the Change-Bots, and you can see them inside it. After pencilling out the design with an HB pencil, I marked the straight lines with blue tape, then applied a really thin coat of white gesso (watered down so the pencils would still show through). Last night I painted the line work black, and today I'll be starting the final painting, using Liquitex acrylics, and should be finished in order to get it to the guitar tech for assembly Monday or Tuesday, which means working all weekend, except for taking a break to sit at my table for Saturday's Windy CIty Comicon. The guitar will be auctioned off by the Comic Book Legal Defense Fund at the Small Press Expoin Bethesda, Maryland.
Posted by Jeffrey Brown at 8:03 AM 6 comments:

I recently contributed a drawing to The Last Match, an exhibition of tiny matchbox size drawings. It's a pretty amazing collection of artists from all over the world, and you can see the works here.
Posted by Jeffrey Brown at 10:35 AM 2 comments: 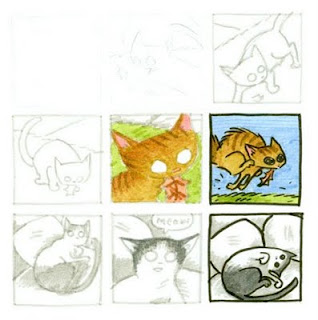 Just in stores now are the Cat Companion Journal, a blank journal illustrated with some of my cta drawings, and The Cutest Sneeze In The World, a box of 30 postcards mostly taken from Cat Getting out Of The Bag along with 8 all new color postcards. Recently, I've begun work on the sequel to the cat book, currently titled 'Cat Walks,' so I figured I should post on my process for the cat comics. I start out by pencilling the panels, then pencil the insides of the panels. Then using the lightest gray Faber Castell brush pen, I ink the lines, then erase the pencils. The new book is half black and white and half in color, but the next steps are pretty much the same for both. I either add the colors, or whatever gray shading I need, again using the Faber Castell brush pens. Finally, to finish it off I add the final black lines.
Posted by Jeffrey Brown at 8:14 AM 3 comments: