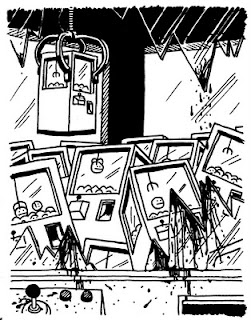 Week Eight's exercise came after watching the Lars Von Trier film The Five Obstructions. I gave the students each two "obstructions" which they had to follow while re-drawing their midterm comic stories. To let them have their revenge on me, I let them give me obstructions. They chose to have me re-draw Be A Man with no text, no characters and no panels. I picked seven pages and the cover to re-draw, making a little minicomic I handed back to them the following week. Here's one of the obstructed pages.
In other news, the new issue of Filter magazine features a full spread and spot illustrations by myself for an article titled "Televisionaries," about kid's TV shows like Yo Gabba Gabba, Pee Wee's Playhouse and Fraggle Rock. And if you missed it coming out at your local comics shop a couple weeks ago, Marvel's Strange Tales Vol. 2 #2 included a four page X-Men story I wrote and drew. I'm taking baby steps toward fulfilling my childhood dream of being the regular penciller on Uncanny X-Men.
Posted by Jeffrey Brown at 3:50 PM No comments: