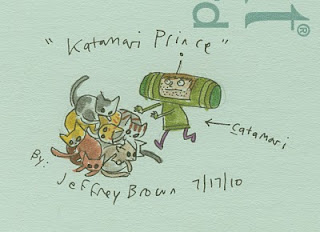 The excellent Portland comic shop Floating World is hosting another benefit art show. This time around the show's theme is the video game Katamari, and the proceeds are going to the nonprofit JOIN PDX, which helps the homeless. You can see and bid on my contribution here. The image above was a little doodle I added to the back of the artwork.
Posted by Jeffrey Brown at 7:23 PM 2 comments: 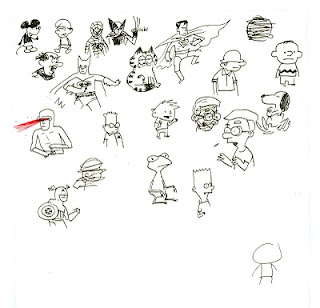 Borrowing from the inestimable Ivan Brunetti, this week's first exercise in class was to draw as many comic/cartoon characters from memory as they could in fifteen minutes. Here's my relatively weak results. It's a fun exercise but harder than I expected, and the idea here was to show how characters can be recognizable even when they aren't reproduced exactly, and how in comics the visual image of a character is such an important part of who a character is, as well as how characters can accumulate baggage over time. The second exercise was to draw a comic developing a character using as many of these methods of revealing character as possible (I'd come up with most of these before class, but the students actually added a couple I hadn't specified):
1. General Appearance (costuming, facial features, etc)
2. Facial Expressions (Batman always seems to be scowling)
3. Mannerisms (body language, like Beatle Bailey's slouch)
4. Narration (usually third person, but not necessarily)
5. Dialogue (how the character speaks, like Rogues southern drawl)
6. Lettering (an alien's speech might be lettered differently)
7. Thought Bubbles
8. Actions (the character's behavior)
9. Reactions/Interaction (how the character responds to environment or other characters)
10. Reactions of other characters (how other characters respond to a character)
11. Coloring (Asterios Polyp is a good example of this)
12. Framing (how a character is framed within a panel, the adults in Peanuts being shown waist down, for example)
13. Style/line quality (how a character is drawn can make a big difference)
Posted by Jeffrey Brown at 5:17 PM 6 comments: 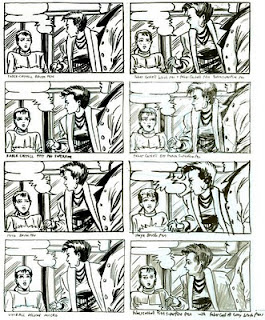 For week three's exercise in my comics class I had the students re-draw panels from comics, first trying to replicate it exactly, and then switching up materials and styles. The idea was to get the students to think about how materials are related to style, and how style can affect content. For an example I tried redrawing some John Romita Jr panels from Uncanny X-Men #192, but after trying to replicate the panel accurately a couple times I had a hard time changing styles much. Fortunately the students did a much better job at that than I did.
Posted by Jeffrey Brown at 6:58 AM 4 comments: 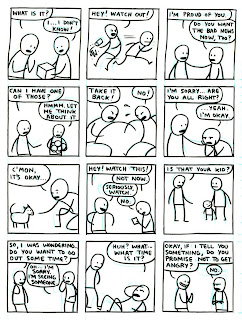 In my first class, I had the students work on six panel, one page jam comics; the twist was that each one had a title already, and the students had to make the completed comic fit that title. This worked to varying degrees, as the usual inherent non-sequitur quality of jam comics kept taking over. For week two, I talked about pacing and time in comics, and drew twelve one panel comics. Students had to pick one and draw their own version of it. Next they redrew it as a two panel comic, and then as a three panel comic, and then a four panel comic, without adding or taking out any significant information. Next they would draw it as a single page, and then as two full pages, without the strict expectation of not adding anything. I tried to make each original single panel something that could be expanded out fairly easily, but still have it where the ideal number of panels could vary. The idea was for the students to think closely about how to breakdown their comics, and get a sense of how varying the number of panels and splitting up information can affect how the comic reads.
Posted by Jeffrey Brown at 11:38 PM 2 comments: 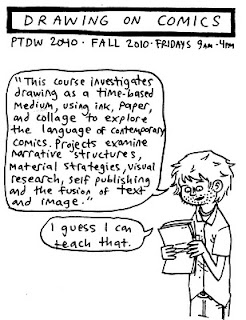 Tomorrow's my first day of school. I'll be teaching "Drawing On Comics" at The School Of The Art Institute, where I got my MFA eight years ago. The usual instructor, Christa Donner, isn't able to teach the class this semester, so when they asked me if I could take over I said why not. I have to admit I'm a bit nervous, never having taught before, but it should be fun and interesting. Fortunately I've received a lot of helpful words from fellow SAIC instructor and Top Shelf cartoonist Jeremy Tinder. Here's the cover to my syllabus, a 16 page zine I'm putting together.
Posted by Jeffrey Brown at 8:05 PM 3 comments: